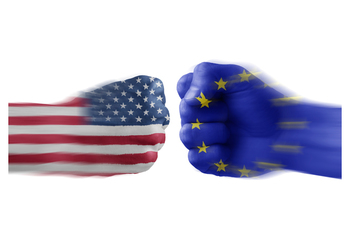 Data on US overtaking EU as China's biggest trade partner, is not surprising.

For a long time, China imported a lot from the EU, especially from Germany. This included a lot of capital and high tech equipment. But the Chinese have now taken the German technology and no longer need the German equipment. So, I guess the EU exports to China are down or at least not rising very rapidly. I do every day witness that EU capital equipment companies do not fly in China any longer (50% of Italy’s exports to China is machinery) because Chinese can make industrial machines that are 90% as good at half the price. As for the U.S.-China trade, I believe it is a misnomer to call it “trade”, actually it may be just Chinese propaganda. US sells very little to China. The so called trade is all Chinese exports to the U.S. which are only bound to grow dramatically as US will begin importing Chinese made cars soon. To correct one of my earlier notes, I think the beginning of the end of the American hegemony was not the entrance of China into the WTO, but the failure of the U.S. to understand and to counter Japan’s predatory industrial policy. The bursting of the Japanese bubble enabled the American policy elite to think that the U.S. had economically overcome Japan. But, actually it never did. The Chinese watched this and carefully studied the Japanese development policy as well, of course, as that of Korea and Taiwan and Singapore. US should have killed Japanese and Korean mercantilism when it was a baby. To recover now, the U.S. would have to have someone who thinks like us as President supported by others who think like us in the Congress, the corporations, and the universities. It will be some time before that happens. Not impossible, but a very long shot I’m afraid.
US to overtake EU as China’s largest trade partner
This article appeared in the Asia First Newsletter of Wednesday August, 2, 2017
The Unites States is set to become China’s biggest trading partner this year, overtaking the European Union. According to Wei Jinguo, former vice minister of commerce in China, trade between the US and China will continue to expand in the second six months of this year. In fact, he said that China’s imports from the US are growing quicker than its exports. This will result in a reduction in the trade deficit, said Wei. One of the reasons for this development is the stronger Sino-US economic and trade ties. The two countries agreed to initiate a cooperation plan in April in a bid to solve trade imbalances. Based on the plan’s objectives, China will resume its beef imports to the US and allow rice imports for the first time. Data showed that between January and June, trade between these two nations hit Rmb1.85tr (USD275bn), up 21.3% from previous year.

Multinationals never ask what is good for their country, they only care for profits and bonuses Next post