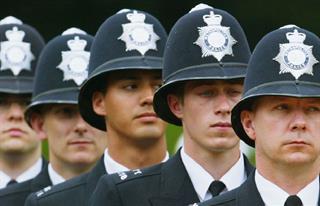 The pride of the English police system, that it has gone ahead armed with only batons for 170 years, cannot change just because of a few more terrorists.

Theresa May continues to go around saying that the people need to choose a prime minister with balls to get England out of the terrorism crisis, but journalists aren’t hesitating to insist that she was minister of the interior for six years and did nothing but cut resources for the police (20,000 fewer officers in the armed forces), cuts to the entire apparatus that wasn’t capable of getting to the bottom of the complaints regarding the danger of one of the terrorists for two years. The same terrorist easily participated in a documentary on England’s Channel 4 on the supporters of Jihad in England. And the third terrorist, identified today thanks to Italian law enforcement who stopped the Italian citizen of Moroccan descent at the Bologna airport on his way to Syria. The Italians informed English law enforcement, who did nothing in this case as well. Now, May is saying that there are many questions that need to be answered. Or the uncertain electorate kicks out Brexiter labourists en masse, otherwise she’ll pass by the skin of her teeth with a narrow majority. If Corbin wins it mean the scene May knew to change the minds of those who wanted her as the defender of Brexit.

I’d also like to call attention to Cressida Dick (nomen omen), the commander in charge of Scotland Yard, who at the people’s growing request to arm police officers (76% of poll responders) answered that the operation the other night went well and that special armed forces intervened 10 minutes after the start of the attack, and they killed the three terrorists in only 8 minutes. Except that the attack occurred just a few steps from the police’s special armed forces headquarters. Had it happened in other parts of London– not to mention the rest of the country–  more interminable minutes would have passed with damages who knows how great. The courageous railway police officer that threw himself at the knife-wielders, if he had had a gun he could have done much more than get injured. But the pride of the English system that has persevered for 170 years armed with only batons can’t change just because of a few more terrorists. I mean, the winner between May and Corbyn will be the one who is considered the lesser of two bad options to face the situation. And it’s an ugly race.

Forchielli VS Sgarbi - Scontro epico a Matrix Next post