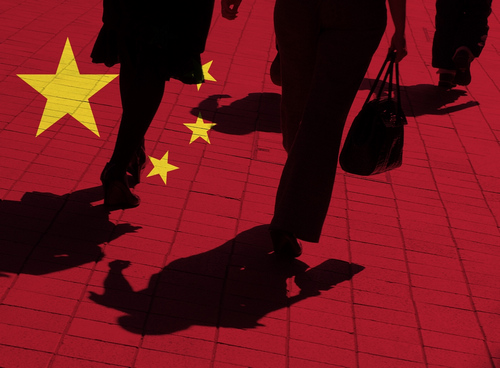 Today I am talking about the Chinese economy in transition. First of all, I would like to define the meaning of an economy in transition. My definition is an economy moving towards a more domestic, consumption oriented one, from that has previously been export and investment oriented. Several characteristics already exist in the case of China. First of all, economic growth rate is in decline and stabilising to form an ‘L’ shape. Two years ago, GDP growth was 7.9%; last year 6.9%; and 6.7% in the first three-quarters of this year. Our target for this year is 6.5%, so there should not be any problem in reaching our goal. The reason I say the economy has started to stabilise is because the Producer Price Index became positive in the last two months, after 54 months of being negative. Secondly the Purchasing Managers’ Index is at 51.2%, the first time it has gone over 50% since October. The 50 is the line which divides the two areas; one of prosperity; the other of depression. The Chinese government defines five industries as ‘emerging industries with strategic importance’: cyber economy; high-end manufacturing; digital economy; green and low carbon; bio economy. At the end of last year, the added value of emerging industry accounted for 8% of GDP, which has doubled since 2010. It also saw enterprise income in 27 important sectors, reach 16.9 trillion, accounting for 15.3% of gross income, which is 3.4% higher than 2010. Also, in the first half of this year the core demand business revenue reached 8.6 trillion, 8.5% more than national industrial enterprises.

For example, online retail sales increased by 25%. You probably know that in China we have a very famous 11.11 festival, called Alibaba group shopping; the sales volume was USD 1 billion in five minutes, with a new record for the whole day of RMB 120.7 billion, equivalent to USD 17.8 billion. If you regarded Alibaba as a single country, the one day sale exceeds Brazil’s total e-commerce, and it would be listed as number 11 in the world.
The second issue I am talking about is the challenges facing China. The first is how to carry out deep structural reform, while expanding the aggregate demand; that is the contradiction the Chinese government must solve. The Chinese government proposes supply side structural reform which I do not want to go into detail, but that is the first challenge. The second is how to prevent the accumulation of financial risks while maintain economic stability. In China, we do have some financial risk problems; last year debt to GDP ratio reached 245%, which is okay and not very high compared to some other countries. However, the corporate debt ratio is very high at 106%, which is very high compared to other advanced countries. Out of that, State Owned Enterprises (SOE) accounted for two thirds of corporate debt, which is the first thing we should take care of. There is also a real estate bubble, especially in what we call the ‘first tier’ cities: Beijing, Shanghai, and Shenzhen. The average price of 100 Chinese cities is growing very fast and in first tier cities the average price is CNY 40 000 per square meter. The housing price to income ratio for Beijing/Shanghai is already equivalent to London, New York and Tokyo; that is a problem that the Chinese government will need to deal with.

The third challenge is to carry out internationalisation of the Renminbi, while at the same time keeping less fractured exchange rates and capital flows. Since 1 October of 2016, the Renminbi has been part of the SDR basket, which is meaningful but leaves the Renminbi with a long way to go to become a genuine foreign reserve currency. The pressure for depreciation of the Renminbi is very high. On 11 August of last year, Beijing started to carry out its exchange reforms. Since then the Renminbi has continued to depreciate, I think probably down about 5% every year; the trend is still there. In addition, foreign currency reserves have reduced by USD 800 billion during this period. This is the great challenge for China: on the one hand if you continue to have RMB internationalisation, you have a totally open capital account, but the government worries that capital outflows will be too high and will destabilise the Chinese economy.

The last thing I want to talk about is the implications of Chinese economy in transition for the rest of the world. It is very interesting that previously the developed countries provide FDI and capital products exports to developing countries; and developing countries provide labour intensive products and the commodities to the developed countries. However, since China became the second largest economy and at the same time China is in the middle, a vast country that is the largest developing country. The role for China is different: it provides the manufacturing goods and FDI to the rest of the world. At the same time, other countries provide technology intensive goods and services, FDI and commodities to China; that is the new role China will continue to play. The second characteristic is that China’s total export and import growth rates have declined; and even this year the net exports have become negative. The demand for raw materials has declined, which will have a negative impact on raw material exporting countries. Exports of labour intensive products is also declining, which means it will provide more opportunities for other developing countries. If you have an opportunity to get into the shopping mall in China and look at some commodities, they are not only made in China, many are also made in Indonesia, etc. a phenomenon that will continue. The third is expanding the domestic consumer market. The market grew very fast, which will increase the import of foreign consumer goods. As I said, the 11.11 festival, included 10% of brands imported from outside; that is also a very important indicator. Also, the structural changes I mentioned will provide potential investment opportunities in services and high-end manufacturing industry. Chinese industry upgrade from the low-end of the supply chain to the high-end, which means that technology imports will increase; overseas mergers and acquisitions will increase; competition with some foreign corporations will possibly heat up. China has also started to expand overseas direct investment, which will inject capital needed locally and create more jobs locally, especially through the OBOR. The FDI will still increase, but by the end of this year ODI will certainly be higher.

I believe that phenomenon will continue. That is the end of my presentation.