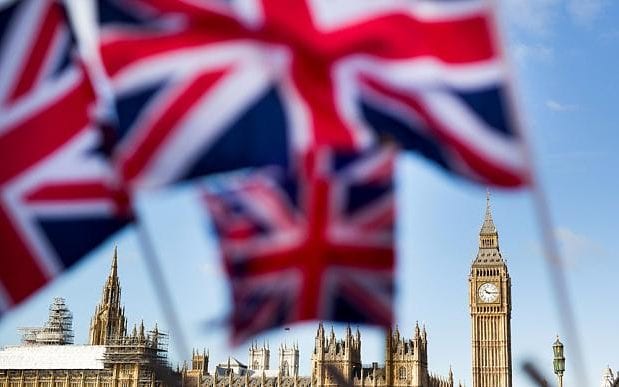 UK vote: a response from the younger generation to its parents who “betrayed” Europe, but also to the worrying global political tendencies.

Theresa May hobbles toward the new legislature with one arm behind her back, leaning on a papier-mâché cane “Made in Northern Ireland”, her only handhold. The arm behind her back was tied by the conservative party leadership and their colleagues in the government, to start to twist it. The “Strong and Stable” woman, as she repeated mechanically ad nauseam, was forced to go on TV and apologize: to her party, activists, the ministers that lost their seats, and ejected candidates. With a trembling voice she admitted that “of course” she’ll reflect on what happened. Laurel came to mind when Hardy blurts: “that’s another fine mess you got me into!” Another twist of the arm and May confirms the five key ministers of the preceding management, from Johnson to Hammond, who she locked up in the tower of London for the entire electoral campaign after a clash over fiscal measures in March. And so, hobbled Theresa stays at 10 Downing Street. Despite the entire election fiasco being her fault, she doesn’t think about resigning for a second. In this moment the Tories don’t have other outlets ready, and May goes forward weak and wobbly until the next episode. The arrangement of the eligible candidates includes the usual suspects, with Johnson at the center. Johnson and others aren’t rushing to get a horse in the race, nor in the vein of demotion. The process of succession foresees an internal electoral contest of at least three months. We’ll see what comes first, and when: another misstep on behalf of the premier or defenestration. Or a crisis in the government if anti-abortion, anti-gay, global warming skeptics don’t agree on external support. With the passing of hours the UDP’s recourse reveals disastrous potential, especially for the peace process in Northern Ireland. Until now the government in London was neutral, the agreement with the UDP risks compromising everything. For now things proceed with the lame May, July 18 or whenever it will be, until the first meeting with Europe at the Brexit table. A not-at-all hard Brexit as Team May’s horrendous losing campaign insisted. The Tories’ anger is the anger of the City and the economic world. It needed everything except uncertainty. May had few friends in the financial and industrial sectors and now she has scores of enemies that reproach her for deciding the anticipated elections without hearing them out. If there was a new European referendum tomorrow Remain would win. The more time passes and the more the English (except the hardcore anti-EU) feel oppressed by the uncertainty, and the more they convince themselves that Brexit is a shot in the dark. But it would especially be the avalanche of the young vote to change the result, the avalanche that pushed Jeremy Corbyn into a resounding comeback.
May got 42.4% of the vote (+5.5%) corresponding to the highest number of votes in favor of Tories since the election of Margaret Thatcher in 1979. And yet it wasn’t enough for an absolute majority with the increment of 9.5% that projected Labour to 40. A 9.5% tagged 18-25, the age range decided to present itself at the polls this time after deserting them in 2015. A response from the younger generation to its parents who “betrayed” Europe, but also to the worrying global political tendencies: Theresa May hand in hand with Trump. More than anything, young people have been attracted by Jeremy Corbyn, who inspired them to vote. Many proclaim this, students and not, underlining the Labourist outsider’s Sanders Effect. They missed the victory, but they became militant, and they will strengthen their activism at the next opportunity to make their electoral weight count. Corbyn won them over because he was able to inspire them to dream and hope, like only the young know how to do.